If you are thinking of using an egg donor in your journey to parenthood, you probably have many questions! Our Using Donor Eggs FAQs offer answers to many common questions that intended parents often ask. For more information on our egg donation program and to view our available egg donors, please contact us or register for free access to our egg donor database.

Egg donation offers a real chance for a couple to have a child. It’s associated with the highest pregnancy rates in all of fertility care, its also associated with one of the most difficult decision making processes because that woman is giving up her genetic legacy. It’s usually a decision that takes time to reach, usually a decision that is made after trying IVF and other fertility treatments and it’s definitely not a decision that should be taken lightly. So egg donation is often sought by women who have reached a certain age and no longer have viable eggs or for gay men who need an egg donor to have a child.So once a couple decides they would like to pursue egg donation they seek an egg donor from an egg donor agency and they usually look for ethnic matches, maybe physical characteristics that match the intended mother, also family history, maybe proclivity toward athletics or academics. Interestingly a woman doesn’t have to choose an egg donor based on her blood type it doesn’t matter, it doesn’t impact the outcome at all.

Egg donors are typically women in their twenties who are in college or post-college or just working. It should be known that egg donor agencies are typically run by non-medical personnel so when seeking an egg donor it is important to work with a reputable and good agency that provides you know honest and transparent information.

So once a couple choses a donor the donor has to go through a battery of screening tests. They have to see a psychologist and undergo psychological screening, talk to a genetic counselor and have genetic tests, they have to see the medical doctor – the fertility specialist and have a battery of tests for infectious disease screenings. That’s mandatory put up by the food and drug administration and it has to be done within thirty days of egg retrieval and then the donor is represented by an attorney so that the decision is binding. Once all of that is done then the donor can proceed to egg donation.

In traditional egg donation after a couple chooses an egg donor from the agency and that donor is qualified medically she begins the process of in-vitro fertilization, so the donor takes injections of hormones to help recruit multiple eggs, now interestingly those eggs are only good for one month, that donor would lose the eggs anyway. So very importantly the donor is not affected by the process as it relates to her future fertility.

We then retrieve the egg from the egg follicles in the operating room under anesthesia, the eggs are then provided to the intended parents where sperm is injected into the eggs. The embryo is allowed to develop for five days, and on the fifth day we transfer one embryo to the intended mother. Additional embryos can be frozen and there is no shelf life on those embryos.

A common question I have from intended mothers using an egg donation is what is my role with the baby? And it is true that the hardwiring the DNA of the sperm and egg do influence things like the characteristics of the child but we are learning more about something called epigenetics whereby the womb is a place where that woman, that mother starts to influence the DNA of the actual fetus. Actually putting molecules on the DNA of the fetus and those molecules influence things like personality intellect, nerve developmental issues and probably many more phenomena of human existence, we are just learning about. So really motherhood begins in the womb.

At Santa Monica Fertility we really specialize in shared egg donation and this is based on my observation that couples have a very hard time navigating egg donation agencies and all the moving parts so we find donors that are excellent donors, proven donors and provide those donors to our intended parents. So with shared egg donation donors go through the same screening process as they would with traditional egg donation but when we get the eggs more than one couple uses those eggs. So for example a good donor will make about sixteen eggs, one couple will get eight eggs and from those eight eggs because it’s a proven good donor we often get three or more of the advanced embryos we call them Blastocyst. Each one has a chance of sixty-six percent in giving rise to a birth. So we transfer one embryo and we freeze the rest. If the couple does not achieve a pregnancy with the first transfer then the second and the third transfers are free. So our program is really built in partnering with patients and donors getting good donors proven donors that make great eggs proven eggs and then assigning a lot of the eggs. And then assigning a portion of the eggs that allows the couple to have multiple chances at a baby. And of course one of the biggest benefits is because more than one couple is sharing the eggs the costs are much less than with traditional egg donation. And we found this program to be very effective, patients like the idea that the doctor is intimately involved in selecting the donor.

There has been a recent increase in frozen donor egg banks and frozen donor eggs are basically eggs that are not used at the time of egg retrieval and frozen for future use. Of course the benefit is they are readily available so couple can obtain the eggs and very quickly thaw those eggs and have a chance at a pregnancy but there are some down sides. Whereas fresh embryos or even frozen embryos have birth rates of about sixty-six percent, the rate we see with frozen eggs is about fifty five percent.

So it’s not bad but it is less than the rate with fresh. We also don’t get as many embryos from frozen eggs as we do with fresh eggs, it’s more variable because the egg were frozen and thawed they are more vulnerable that way. So couples who seek frozen eggs should really work with a clinic that has treated the donor and a clinic where the embryologist themselves have frozen the egg. And with the recent advent of donor egg banks or egg banks that offer donor eggs I caution patients to be careful with that because freezing the egg and caring for the donor somewhere else and then shipping them to a clinic or lab that never worked with these eggs really leads to lower pregnancy rates. And so in seeking frozen eggs which are good option a couple should seek centers where the donor has her care and where the eggs are frozen by the same embryologist who is going to be thawing the eggs for best success rates.

Does the success rate differ by age?

In general, the uterus does not age in the same manner as the ovary. The success rate is similar for women in their third, fourth and fifth decade of life – assuming that the patient is in good health and otherwise a suitable candidate for this treatment.

+
Is there an upper age limit for being a recipient of donor eggs?

The typical upper age limit for a fertility patient using donor eggs is 55. Dr. Jain has substantial experience treating patients in the 50+ age range. He is also the senior author of an article on successful fertility treatment techniques for women over 50 that was published in the prestigious Journal of the American Medical Association in 2002.

+
What information does each party have about the other?

+
What rights does the donor have over the eggs?

According to current laws, donors do not retain rights to eggs or resulting embryos after donation.

+
How are donors screened?

Egg donors go through a thorough screening process in order to select qualified candidates and help ensure that information provided about the donor’s medical history and health status is accurate. The process includes a medical evaluation (including an examination of reproductive organs and blood tests to check hormone levels), genetic screening, STD and drug testing, and psychological counseling.

+
Where are donor eggs available and how long does it take to obtain them?

Here at Santa Monica Fertility, we have our own in-house Egg Donor Bank and an online donor database, where patients can review potential egg donors. The length of time required for selecting a donor and going through a retrieval cycle varies. Patients who want to shorten the time involved in selecting a donor may wish to use frozen eggs which are available immediately.

+
Is there a way to reduce the cost of egg donation?

Some patients choose the shared egg donation offered by Dr. Jain. In this process, two couples share the eggs retrieved from one donation cycle. This reduces the cost of the eggs for each couple by about 50%.

+
How is the cycle of the recipient synchronized with the donor?

Birth control pills and other hormones may be used to manage the recipient’s periods and ensure she is ready to receive the donated eggs at the appropriate time.

+
Does the recipient contribute any genetic material?

The recipient does not contribute to the genetic material of the embryo in a traditional sense. However, the environment of the recipient’s womb can have a substantial effect on how the embryo’s genes are expressed as it develops. 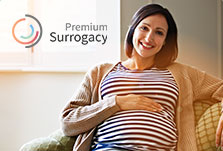 All of our Surrogates are medically and psychologically screened, approved for Surrogacy and ready for matching.

Donor Eggs Epigenetics: Will The Baby Look Like Me? (2022)