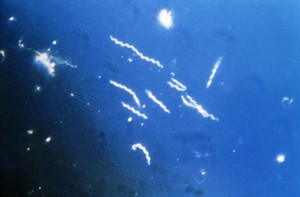 Borrelia burgdorferi are bacteria are transmitted to humans by the bite of infected deer ticks and caused more than 23,000 infections in the United States in 2002.

If you are TTC the old fashioned way and have been having issues with conception, new evidence suggests that you may want to get both you and your partner tested for Lyme Disease.

Lyme disease is thought to be a tick-borne infection caused by Borrelia burgdorferi, a type of bacteria known as a spirochete. The Lyme spirochete resembles the agent of syphilis, long recognized as the epitome of sexually transmitted diseases. In a recent study presented at the annual Western Regional Meeting of the American Federation for Medical Research (and an abstract of the research was published in the January issue of the Journal of Investigative Medicine), Lyme disease may in fact be sexually transmitted. Of course most everyone knows that one can contract the life-long disease via tick-bite, but most people don’t know how this disease works among close individuals and as a contagion – which is why it is so important for more research to be done.

What does this mean for those couples trying to get pregnant, or for individuals with mysterious health symptoms? Talk to your doctor. Get tested, and discuss with your respective fertility doctors & health care providers what symptoms you are experiencing, and how to prevent transmission.

At Santa Monica Fertility we offer testing and care for all of your fertility needs. Feel free to contact us if you have any questions! We are always happy to help you on your journey to healthy parenthood.