The Future of Fertility Treatment: The Nuclear Transfer 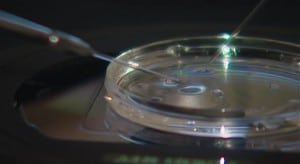 In the “nuclear transfer” procedure the nucleus is removed from one egg and transferred into another egg where the nucleus has been removed.

With infertility disorders increasing within the United States, and around the world, more and more people people are opting to utilize Assisted Reproductive Technologies (ART) such as In Vitro Fertilization (IVF) in order to conceive. This has been happening for decades now in the U.S., however third party or third person IVF is new. But what is third parent IVF?  It involves a procedure called “nuclear transfer” and has the potential to reverse the age factor for egg quality in fertility.

The human egg has two main compartments. The first part is the nucleus, which contains a person’s DNA (genome – repository of hereditary information) organized into 46 chromosomes of which 23 are inherited from the mother and 23 from the father. The second part is the cytoplasm, which surrounds the nucleus and contains all of the components needed to maintain egg viability and support reproduction. One can visualize the nucleus as the yolk of a sunny-side up egg and the cytoplasm as the egg white.

The energy comes from something called mitochondria – a small oval-shaped organelle located in the cytoplasm, and has its own unique DNA.  Thus, in almost all of our cells there is actually two types of DNA, genomic DNA in the host’s nucleus AND mitochondrial DNA.  As women age, DNA within mitochondria located in their eggs become increasingly mutated leading to decreased energy production. This lack of energy causes the egg to make errors in the number of chromosomes it discards thus leading to abnormal embryos. The term “egg quality’ has been used to describe an egg’s ability to create a chromosomally normal embryo and is known to decline with age, drastically after the age of 35, in most women.

So, back to this “nuclear transfer” – in this procedure, the nucleus is removed from one egg and transferred into another egg where the nucleus has been removed. In theory, if the nucleus of an egg from an older woman is transferred into the cytoplasm of a younger woman’s egg, the ensuing embryo and child would solely inherit the characteristics of the older woman. Common sense tells us that younger cytoplasm could provide more energy to facilitate correct chromosomal segregation and normal embryo formation. This technique offers hope to women over the age of 35-50 who experience rapidly declining fertility.

With a nuclear transfer process there are officially 3 sources of DNA: mitochondrial DNA from the woman donating cytoplasm, nuclear DNA from the woman donating the nucleus and sperm DNA from the man donating sperm…three-parent IVF. Since the child has DNA from a third party, in this case the mitochondrial DNA from the cytoplasm donor, the FDA considers it a form of gene therapy and has placed a ban on transferring embryos derived in this manner. However, more and more research is being done and this therapy may be available soon. If the FDA approves transfer in some of the preliminary research, and healthy babies are born, the opportunity to expand nuclear transfer to other populations such as those with poor egg quality may be become a very helpful fertility treatment and reality.

Back to Blogs Contact Us
« Should You Genetically Test Your Egg? Can Clomid Help You Get Pregnant? »

Using Essential Oils When Trying To Conceive and for IVF

Getting Pregnant in Your 40s or 50s