Eggs are housed in a protective sac called a follicle. To promote the growth of ovarian egg follicles, the pituitary gland naturally secretes the hormone Follicle Stimulating Hormone (FSH) into the blood stream. Typically only enough FSH is secreted each month to promote the growth of one egg follicle despite there being many follicles available in each ovary.  A tablet form of fertility medication called clomiphene citrate (Clomid) can be taken to increase the amount of FSH being secreted by the ovary. In this manner clomiphene citrate induces the growth of multiple egg follicles, typically 2-4 in number.

Alternatively, injections of FSH (called gonadotropins, Follistim, Gonal-F, Menopur, and Bravelle) can be used to induce the growth of even more follicles. These injections are given subcutaneously (under the skin) for 8-12 days. Once the follicles are ready, an injection of the hormone hCG (Ovidrel, Pregnyl) is used to ovulate the follicles.  At this point eggs are either combined with artificial insemination or harvested and fertilized in the lab (in-vitro-fertilization) to create embryos which can then be transferred directly to the uterus. 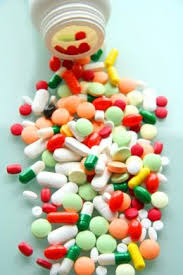 Medications That Support  The Uterine Lining:

During a normal menstrual cycle, one egg follicle is recruited under the influence of pituitary FSH and subsequently ovulates as a result of the pituitary LH surge. The egg follicle makes a potent hormone called estradiol during the first two weeks of the egg’s development (pre-ovulation). After the egg is ovulated the remaining part of the egg follicle then begins to produce progesterone in addition to estradiol. These hormones together cause the uterine lining (the endometrium) to thicken and begin to secrete molecules which help the embryo develop into a pregnancy.  In some forms of fertility treatment such as frozen embryo transfer, egg donation and surrogacy, tablets or patches of estradiol and suppositories or injections of progesterone are given to artificially prepare the endometrium to be able to support the early pregnancy.