Will taking the OCP (oral contraceptive pill, or the birth control pill) enhance your fertility down the road, or decrease it? The birth control pill has been used for decades to suppress ovulation through suppressing FSH and LH, using estrogen and progesterone for 21 days and creating a breakthrough bleed as opposed to a true period.

Some OBGYNs and fertility doctors suggest that the pill may be helpful. Because it keeps a woman from ovulating, those same eggs that would’ve been selected for ovulation remain in the body and are potentially saved for a later date. Other doctors and women have had negative experiences with the pill, with menstrual cycles not kicking in, sometimes up to years after the cessation of the pill.

So how to doctors know who’s bodies will react how? They don’t – there is no way to predict how someone’s body will react once they stop the pill, although some research shows that many women go on to conceive eventually – it just may take 1-3 years once you stop taking the pill to conceive. For some women it took as long as 72 months to conceive. So what does this mean if you are using this form of birth control? Think about when you may want to start having a family now. If you don’t know exactly when you want to have kids, then make sure to take care of yourself when you are taking the pill so that you can do everything to optimize your fertility right now. Most doctors suggest practicing pre-conception care now (both for men and for women), so taking a break from the pill and taking 3 months to eat healthy, rest, and start prenatals is a good plan. It’s important for women to build up their folic acid and get as healthy as possible while preparing for pregnancy and motherhood. 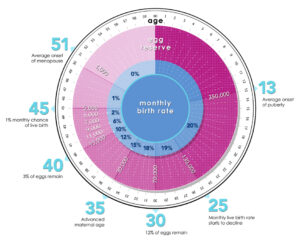