Infertility is defined as one year of unprotected intercourse without pregnancy. However, women over thirty-five or those with male partners over forty five may wish to seek an earlier infertility evaluation. In the United States, nine out of ten couples with a female partner under the age of 35 who are actively trying to get pregnant typically succeed within one year, the chance of a pregnancy being about 25% per month. For couples that fail to achieve pregnancy after one year (and for women over the age of 35 after 6 months, and men over forty five) fertility testing is recommended to identify any obstacles that could prevent pregnancy.

A woman is born with approximately two million non-renewable eggs in her ovaries. Each egg is housed in a sac, and together the egg and sac are referred to as a follicle. Once a month, several of these follicles begin to mature under the influence of follicle stimulating hormone (FSH). FSH is produced by the pituitary gland and travels in the bloodstream. As the follicles grow, they in turn produce two hormones called estradiol and inhibin. These two hormones travel in the blood to the pituitary gland where they turn off the FSH production. Only the most mature egg follicle can continue to grow once FSH production drops. This process prevents too many egg follicles from developing and is important as humans are not litter-bearing and the womb should ideally carry only one baby at a time.

Approximately fourteen days after the start of the menstrual period, a second hormone, called luteinizing hormone (LH) is produced by the pituitary gland. This hormone travels in the bloodstream to the mature egg follicle and causes it to rupture in a process called ovulation. Once the follicle sac ruptures, the egg is released from the ovary and swept into the end of the fallopian tube. The remainder of the ruptured follicle remains in the ovary and continues to produce hormones including progesterone, which only appears after ovulation.

Men produce millions of sperm each day. Following sexual intercourse, sperm swim rapidly through the cervical mucus up into the fallopian tube where they attempt to fertilize the egg. Although sperm can survive for 2-3 days in the cervical mucus, the egg only lives for twenty-four hours. For this reason, the timing of intercourse is very important.

If fertilization is successful, the fertilized egg, now called an embryo, begins to divide as it travels down the fallopian tube toward the uterus. Approximately seven days after fertilization (twenty-one days from the last menstrual period), the embryo reaches the uterus and implants in the uterine wall. Approximately seven days later (twenty-eight days after the last menstrual period), the pregnancy hormone human chorionic gonadotropin (hCG) can be detected in the blood or urine. Approximately two percent of the time, the embryo does not make it to the uterus, but gets stuck in the fallopian tube. This is referred to as an ectopic pregnancy and is not viable.

The pregnancy can be visualized using an ultrasound machine approximately three weeks after conception. At this point, a gestational sac can be seen in the uterus. One week later, the fetal heartbeat can be visualized. The fetus develops rapidly during the first eight weeks of pregnancy. If it is genetically abnormal, it usually dies and is miscarried at this time.

At Santa Monica Fertility, we offer the most advanced reproductive and fertility treatments in order to treat both common and complex causes of infertility. We work with patients from all over the world, to right here in our back yard in sunny Santa Monica, California, with a holistic approach coupled with comprehensive, customized care. Feel free to call us with questions, guidance or to check in and see if where you are is on track for the fertility journey – we are always happy to answer your questions. 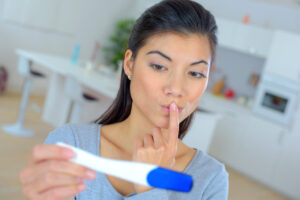